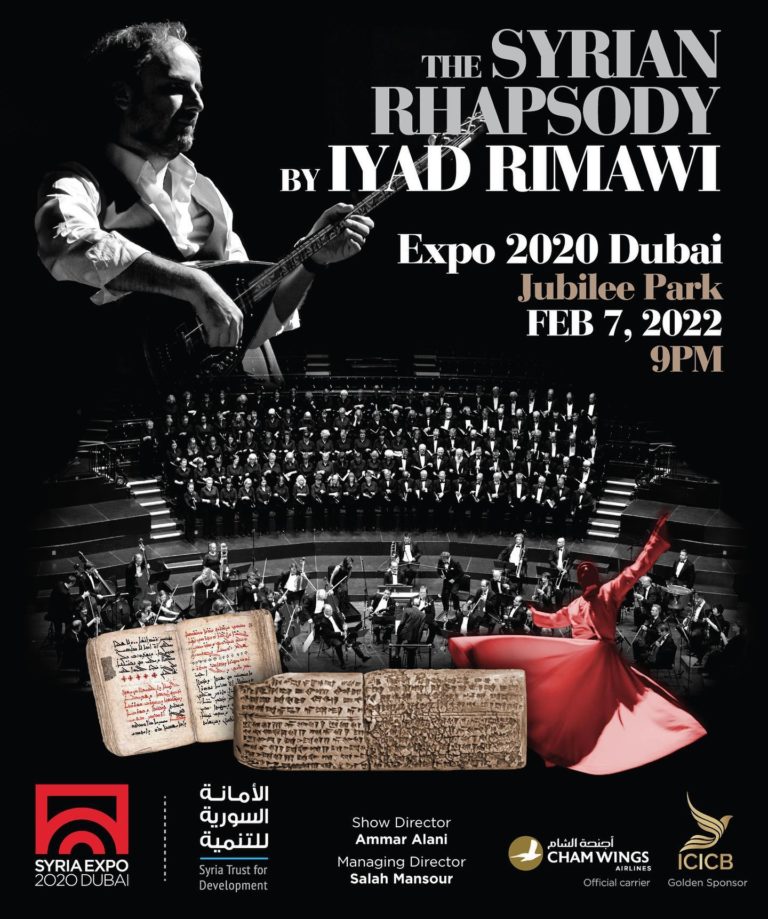 The greatest production at Expo 2020 Dubai "The Syrian Rhapsody"

Dubai, SANA- As part of the cultural program organized by the Syrian Arab Republic pavilion at Expo 2020 Dubai, it will present on February 7 at the Jubilee Theater the premiere of the epic musical work, the Syrian Rhapsody, by musician Iyad al-Rimawi, in cooperation with the Syria Trust for Development and sponsored by Cham Wings Airlines.

The Syrian Rhapsody is the first musical work dedicated to celebrating the history of collective singing in Syria and the world. It was composed and distributed by al-Rimawi, with the participation of more than 100 musicians and singers, led by Maestro Misak Bagbudrian.

A unique cultural experience that the audience will live with through a visual presentation of music that brings together three thousand years of musical history, as the work begins with a new vision of the oldest musical notation known to the world, which is the Nikkal hymn which was discovered on a clay tablet (cuneiform) dating back to more than 1400 BC in the Syrian city of Ugarit.

“Through Expo 2020 Dubai, we wanted to convey a message of unity, harmony and love to the world through music,” Syrian Ambassador to UAE and Commissioner-General of the Syrian Pavilion at the Expo, Dr. Ghassan Abbas said in a statement.

He invited music lovers to attend the world premiere of the Syrian Rhapsody concert, expressing gratitude to Expo Dubai for giving this opportunity to share this work with the world.

Syria Trust for Development is working to protect and promote the Syrian cultural identity as a national development organization that participates in the production of this international Syrian work.

A member of the Trust’s Board of Trustees, Fares Kallas, spoke about this participation, indicating that the Syrian cultural identity is rich and the Trust is committed to protecting and enriching it for future generations.

Kallas added that culture can have positive and tangible impact beyond its preservation, which is why this project was done with Iyad al-Rimawi, who brought together hundreds of talented Syrians in one work.

This musical project was worked on over a period of 9 months, according to al-Rimawi who added that Syrian Rhapsody is an artistic journey that aims to explore the essence of music that makes it a global language.

“Expo 2020 Dubai is the largest event in the world, and on the Jubilee Theater we will present something unheard of before, as we gathered three thousand years of the Syrian and international music history together in one musical show,” al-Rimawi added.

In a statement to SANA, Maestro Bagbudrian said “This international show is characterized by talking about what is historical and belongs to our cultural musical heritage in an orchestral language.”

According to Bagbudrian, Syria has important composers of music, considering that presenting a show related to the history of Syria in an orchestral manner through Syrian musicians who studied in Syria and grew up there, and others who reside abroad, most of whom qualified at the Higher Institute of Music in Damascus, embodies an exceptional orchestral state and a contemporary vision of a history we have lived for three thousand years.

It is noteworthy that the aim of the concert is to communicate between people through the language of the world, which is music, while the word Rhapsody in Greek means the reader of epic poetry, and by the sixteenth century it began to be used in Europe as a label for other literary forms.